Think of it as the appetizer. A scrumptious two-serving app at that.

The days of Purple Celebration unofficially kicked off Wednesday night at the Dakota Jazz Club in downtown Minneapolis with separate performances by Prince associates – LP Music and Shelby J.

LP Music, which played the early show, is a jazzy combo featuring ex-Prince tenor saxophonist Eric Leeds (hence L) and bassist Paul Peterson (hence P), who played in the Time and the Family. However, as Leeds said, they have an open marriage and Peterson was gigging in Australia as St. Paul and the Minneapolis All-Stars with guitarist Mike Scott, keyboardist Ricky Peterson and others.

Leeds turned to bassist Tony Axtell, longtime sound man for Garrison Keillor’s “A Prairie Home Companion.” And Axtell fit right in with a simpatico group of players that found the groove as Leeds and keyboardistsPeter Schimke and Brian Z were featured as lead musicians.

As a soloist, Leeds came across like a storyteller, spinning yarns with his expressive passages filled with twists and turns in the plot. The uptempo pieces like the funky “The Perfect 10” and the sometimes frantic, multi-ethnic-flavored “Pacemaker” were crowd favorites in the winning 100-minute set.

LP Music: As part of unofficial Prince Week, two veteran players from his orbit — NPG and Madhouse saxophonist Eric Leeds and multi-instrumentalist St. Paul Peterson of the Time and the Family— do their funky jazz thing. Their all-star Twin Cities ensemble will include drummer Petar Janjic, percussionist Marc Anderson and keyboardists Brian Z and Ricky Peterson, on break from the Fleetwood Mac tour. (11 p.m. Fri. Icehouse, $30) 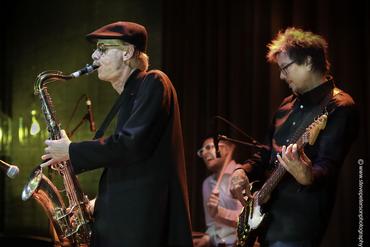 LP Music @ Icehouse
LP comprises the last-name initials of co-leaders Eric Leeds and Paul Peterson but refers equally well to “long player,” as each has been in the game a minute, most prominently as charter members of the Family, a Prince-organized outfit with three folks from the Time and a killer version of Prince’s “Nothing Compares 2 U” on their lone album from 1985. Leeds is on saxophones and keys, Peterson is the bassist, and a wide assortment of locals, including pianist Peter Schimke, help out on their new release, “No Words.” 11 p.m. $30. 21+. 2528 Nicollet Ave. S., Minneapolis. More info here.—Britt Robson