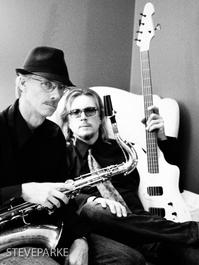 BIO
Out of the depths of the Minneapolis funk/jazz scene raises a new sound, a new idea.

L.P. Music blends the funk and jazz roots of Leeds and Peterson, and allows these true musicians a platform to express themselves.

No preconceived melodies or songs…..just a groove and a key…the rest is up to the imagination of L.P. and their stellar cast of special guests. Usually accompanied by an additional keyboard player and a drummer or two, these musicians converse with each other, and the interaction is an incredible site to be seen.

Their initial gig was at historic 1st Avenue in June, 2013, when D’Angelo and Questlove from the Roots asked them to come and play. What ensued was a 20 minute song, leaving the sold out crowd screaming for more!

Music critic Jon Bream said, “They invited some “legendary luminaries from Minnesota” (Questlove’s words, since he did almost all the talking onstage) — longtime Prince saxophonist Eric Leeds and bassist/singer Paul Peterson, and later Mint Condition frontman Stokley Williams — … Suddenly, with these extra players, D’Angelo was transformed into a performer, not just an introverted keyboardist lost in his own groove. He clearly relished Leed’s expressive sax (though he was startled when Leeds later played D’Angelo’s keys). Peterson contributed funky lead vocals and a classic Minneapolis Sound bass line.

Look for their first record the fall of 2019.